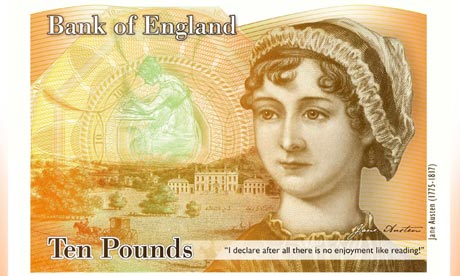 Jane Austen fans around the world are rejoicing to hear that she will grace the new £10 banknote, to be released in 2017.  (And if they’re like me, they just might see the event as an excuse to plan a trip to England to get their hands on one.)  But the event isn’t without its irony, apropos for a writer who wielded that particular literary technique the way one of her favorite naval officers might use his sword.

Austen’s Money (or Lack Thereof)
It’s ironic that Austen will now provide a face to the money she had so little of in her lifetime.  While millions (billions?) have been made adapting and playing off of Austen’s work, she lived her life in an atmosphere of financial uncertainty and dependence.  When she was small, her father had to pinch and scrape to make ends meet for his family of ten.  By the time Austen was in her early twenties, her father gave her an allowance of £20 a year, but since he gave it in quarterly increments, she would not have had her hands on £10 at once.  She kept careful track of her small expenses, using what she laughingly called “Vulgar Economy” to stretch her money — dresses were re-worked, or turned into petticoats, and every purchase carefully considered.  She wrote of her clothes: “I am so tired & ashamed of half my present stock that I even blush at the sight of the wardrobe which contains them.” [Letter number 15, Jane Austen’s Letters, ed. Deirdre Le Faye]  When Austen’s father died, she and her mother and sister were dependent on their brothers, and were it not for their significant contributions, would have been destitute.

Austen rejoiced when she started earning money on her books. “I have now written myself into £250 — which only makes me long for more,” she wrote to her brother Frank. [Letter number 37]  For the first time in her life, she had income she could actually call her own. In total, though, she made less than £700, and the majority of that was not spent but rather invested in secure Navy five per cent Stock. Austen published all of her books except Pride and Prejudice (which was snatched up by a publisher, sensing a hit) at her own risk, meaning that if the books lost money, she would be required to reimburse the publisher for all the expenses.  So she likely stocked away her earnings in order to be able to cover future losses. She never felt free to be extravagant.

Austen and the £10 Note
But aside from Austen’s tenuous financial state, there’s a poignant story specifically related to a £10 sum.  After years of scribbling, writing her stories out and reading them in the evenings to entertain her family, and after one of her beloved stories (First Impressions, later to become Pride and Prejudice) had been rejected by a publisher, Jane sold her first novel.  Susan (which we know as Northanger Abbey) was purchased in 1803 by Crosby & Co. for the sum of £10.  They promised early publication, and even advertised the novel, but never actually printed it. Like any writer, Austen would have waited anxiously to see her work in print, to find it in bookstores and the library, to read reviews and hear what people thought about it.

Months became years, and the novel was never published. Six years later, probably embarrassed by the situation and not wanting to involve her brother, who handled her negotiations, Austen wrote to the publisher on her own, inquiring about the manuscript and offering to provide another copy if they needed one.  Crosby & Co. sent a horrible letter back, saying, “There was not any time stipulated for its publication, neither are we bound to publish it.” They offered to sell the rights back to her for the ten pounds they originally paid for it and told her that if she attempted to publish it elsewhere without first buying back the rights, they would “take proceedings to stop the sale.”

Austen must have been incredibly disheartened, and successful publication — success as a writer — must have seemed very far out of reach. We know that £10 was not an insignificant sum to Austen, and likely because of that she opted not to buy back the rights to the novel at that point. Whether she didn’t have the money or whether she simply thought it was unwise to put £10 into a manuscript she thought was unlikely to sell elsewhere, we can’t be sure.  (The story does have a good ending, of course — thirteen years later, after successfully publishing four novels, Austen bought back the rights to Susan, assured then that she would not be throwing her money away. Her brother published it as Northanger Abbey after Jane’s death.)

And now Jane Austen’s face will be on the £10 note.  I will see it and think of that struggling 33-year-old writer, duped by a publisher, unable to buy back the rights to her novel, probably fearing she would never be published. Others might see it and think of her genius and all her success, and they would be right, but Austen at 33, unable to spend £10, could never have imagined the kind of success that would eventually land her on the £10 note herself.

I’ve written more about Austen’s life in my books The Jane Austen Guide to Life and A Walk with Jane Austen.

For me, a good book is a luxury, something to be savored, something that in its own right feels like a vacation.  This is one of those books, one of the best I’ve read in a long time. I wasn’t going to pick this up. (And I’m late doing so. It’s been out for four…